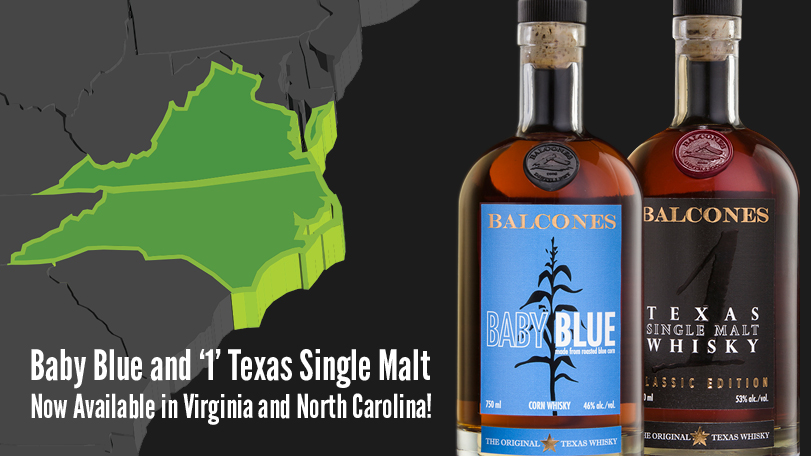 We’re very excited to announce that we are steadily growing our partnership with Southern Glazer’s to add several new markets to our national footprint. Starting right away, two of Balcones’ most acclaimed whiskies will be available for ordering by retailers in both Virginia and North Carolina, with more on the way. Both Baby Blue, the first Texas whisky ever legally sold in the country, and the award-winning ‘1’ Texas Single Malt are being added to ABC store shelves now.

Baby Blue is a whisky distilled from a mash of 100% blue corn.  Released in 2009, it has earned recognition from numerous critics and judges, and has been awarded two Double Gold Medals at the San Francisco International Spirits Competition, and been named Taste Master by The Spirits Business’ 2016 World Whisky Masters. Baby Blue has a fresh aroma of roasted corn, vanilla, honey and soft oak, with flavors of masa, agave, cocoa, and a light, buttery finish. Our most approachable expression, it is bottled at 92 proof.

‘1’ Texas Single Malt is known to enthusiasts and tasting experts alike as world-class whisky, having earned only 60 awards from internationally recognized blind tasting events, such as being named American Single Malt of the Year by Whisky Magazine’s World Whiskies Awards three years in a row. Made from Golden Promise barley, ‘1’ Texas Single Malt is aged in a variety of oak barrels, making each batch unique and memorable. The nose expresses notes of chocolate, caramel, coffee and clove, while the palate reveals flavors of toasted bread with butter, roasted fruits, cinnamon and sweet malt. Bottled at a whopping 106 proof, the whisky provides an intense experience but finishes clean.

All of Balcones’ whiskies are produced from grain to glass at our distillery in downtown Waco, TX. Our whiskies are only mixed with great tasting Hill Country spring water, and never artificially colored, flavored or sweetened. We employ non-chill filtering to retain as much of the rich flavors and aromas from our oak casks as possible. To learn more about our story and whiskies, please visit www.balconesdistilling.com

Customers seeking to purchase Baby Blue and ‘1’ Texas Single Malt can inquire with their local ABC stores, and request it if they do not carry it!